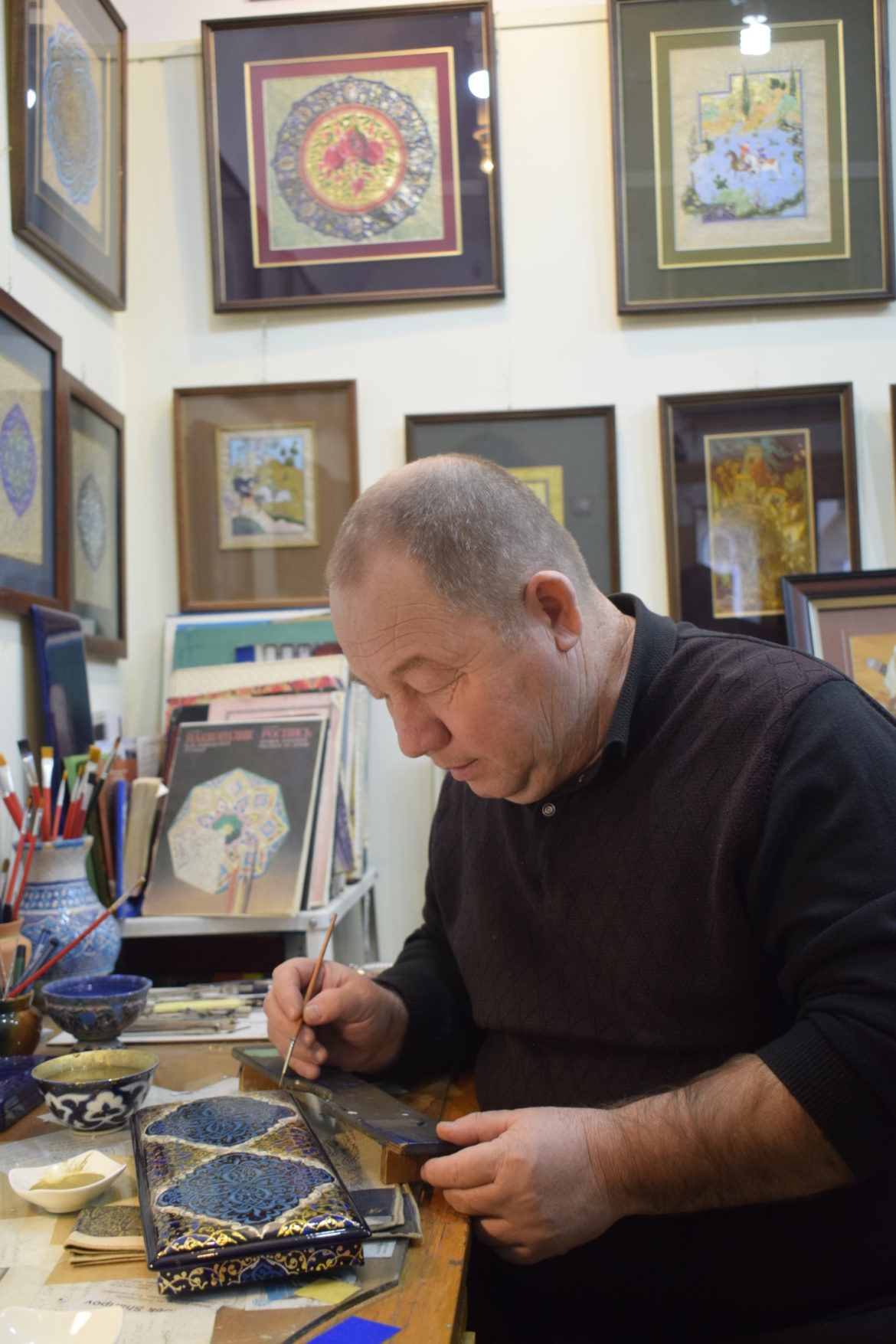 Uzbekistan can be called a country for adherers of lacquer miniature painting. Especially popular are jewelry boxes, powder boxes, pencil cases and cigarettes made of papier-mâché. It is known that the local school of Uzbek lacquer miniature was formed in the era of Temurids. At the end of the XIX century the secrets of its manufacture were lost, and only in the last years of the 20th century traditional artistic techniques and technologies were revived.

History of lacquer painting in Uzbekistan

The history of the art of lacquered miniature of Uzbekistan goes back. Ancient kind of national craft flourished in Bukhara and Samarkand in the epoch of Temurids. Over time, people began to forget about it, and, unfortunately, most of the works of that time have not reached us.

With the coming of independence in Uzbekistan, the revival of lacquer painting began.

Today, the school of lacquer miniature painting has established in Uzbekistan. Its bright representatives can be found in Tashkent, Bukhara and Samarkand. Uzbek lacquer miniature began to develop as a kind of art craft.

The traditional school of Uzbek lacquer miniature has its own technique and tradition of painting. The ornamental painting and painting in the style of ethnographic plots are sought-after. In recent years, floristics has developed. In the late 70’s XX century in Uzbekistan, the revival of traditional lacquer painting on papier-mâché (“tosh-kogoz”) began. According to medieval technology, to decorate objects with a varnish painting of gold and bronze powder, the ground was prepared with the joining of cherry or apricot glue, which was applied with brushes. Lacquer and paint for papier-mâché were made using a complex recipe. The production of papier mache and lacquer painting flourished in Samarkand in the fifteenth century, as evidenced by genuine ornamental medallions of papier-mache, truly miraculously preserved among the clays in the interior of Gur Emir and Bibi Khanum mosque. The golden blue dome in the interior of the main room of Gur Emir, consisting of 998 elements of papier-mâché, is of great interest. 112 original elements served as material for painstaking restoration work.

There are suggestions that the art of lacquered miniature of Uzbekistan got to Northern India from Samarkand in the 15th century. In India it reached a high level of development and thrives to this day. Articles made of papier-mâché are covered with a miniature floral design. Elegant epigraphic inserts were often included in the ornamental composition of the pencil-cases. The painting was applied by thin brushes; the paintings were prepared from gold or bronze powder, from sheet gold and bronze on apricot and cherry glue. The preparation of varnishes and paints had a complex and varied recipe. Though many secrets of the Uzbek lacquer miniature were forgotten, coeval Uzbek artists and folk masters managed to revive this art by finding their own style of painting, while preserving the age-old fundamentals and forms of creating miniatures.