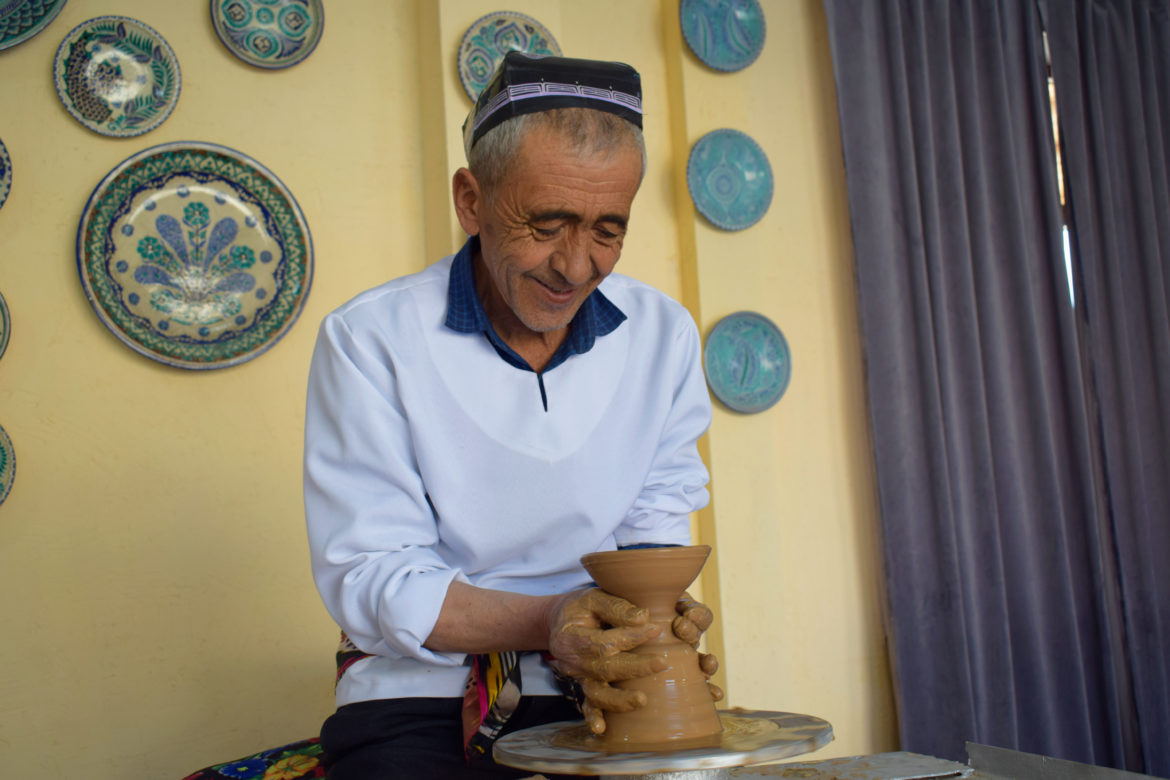 One of the most ancient, exceptionally interesting types of art in Uzbekistan is decorative ceramics. Its first specimens, discovered by archaeologists, date from the time of the deepest antiquity. These are lyagan dishes, spherical bowls, and cups, vases, jugs, large earthenware pots “huma” of various sizes – from big to miniature, convenient for consumption and refined in form. For many centuries and till now, ceramic products are in demand. They are distinguished by high skill of execution, the beauty of forms, the magic of ornamental decisions, the harmony of bold imagination, and sense of proportion in handling color.

The works of many folk ceramics masters of Uzbekistan entered the museum collections of the republic and foreign countries, as well as private collections.

Slip and non-slip ceramics of the leading centers had local features, manifested in the uniqueness of forms, ornamental décor, and color. The traditional centers of ceramic production, which have survived to this day, are Rishtan, Gijduvan, Samarkand, Gurumsaray, Shakhrisabz, Urgut, Khorezm, Tashkent.

In recent years, historically established production centers are reviving; the assortment of products (dishes, bowls, and various types of products for storing products) is expanding significantly, and their quality is improving. Masters, feeling the support of the state, increase production volumes, to achieve profitability and competitive ability of their products. At the same time, new ornamental and depictive motifs appear in the decoration of Uzbekistan ceramic products.

A characteristic feature of the Gijduvan ceramics is a solid bay of dark green or brown glaze in combination with the simplest engraved ornament. This decor is simple, but extremely original.

Not far from Bukhara is the city of Gijduvan, which has long been recognized as the center of ceramics.

The guests of Gijduvan will be shown the process of birth of the bowl. And if the guests have the opportunity to stay, then they can stay there for a few days to learn all the details of pottery mastering: starting from the potter’s wheel and finishing with painting and roasting. All your own masterpieces can be taken with you.

The distinctive features of the Gijduvan ceramics, which have come down to us from the depths of centuries, is a special vegetable border – “islimi”, which adorns the central part of the rim of the bowl. The upper part of the rim is like compressed crosses. The bottom of the bowl is decorated with engraving – “khona khorosh.”

The other very characteristic pattern is the painting “abr”. “Abr” means the cloud.

Another feature of the Gijduvan ceramics is the paints “angob”. These are paints, the basis of which, in addition to the coloring matter is clay. These thick paints-clays are applied over the raw product and when fired they give the effect of a convex, very relief pattern. It turns out that the convex pattern is in the vitreous thickness of the yellowish glaze, and when the light hits the surface of the dishes, the effect of the glow of the pattern is created. Most masters of Gijduvan produce paints from natural components.

The Gijduvan ceramics was presented by Uzbek masters, in particular, by the House of Ceramics of Nazrullayevs at numerous competitions and festivals, where it received the highest marks.

Rishtan potters enjoy great fame. They combine turquoise glaze with a white background coating and vice versa. In the technique of these masters, geometric ornamentation is not used. In Rishtan, the oldest masters and representatives of the younger generation brilliantly master both the molding technique and the painting.

The peculiarity of the Rishtan ceramics is bi-hromic coloring. It is as restored, as is the secret of the production of the famous glaze “ishkori”, a dye derived from plant ash. Currently, masters are working with uncomplicated ready-made alkaline glazes. The decor of the Rishtan ceramics is mainly vegetative, as well as images of kumgans, symbols of prosperity and well-being, knives, birds, fish, elements of architectural decor.

The closest in terms of color to the Rishtan ceramics is the Khorezm one. On the dishes is the same style of painting as in the architectural decor.

Khorezm painting cannot be confused with anything. It has an amazing beauty and elegance ornate pattern with wide horizontal patterned edges. There are the same, traditional for the Asian Middle Ages, the blue tones. Beautiful, dense, clinking clay is a distinctive feature of the Khorezm ceramics. Smooth, large planes of the lyagans with raised boards are also distinctive features of the Khorezm ceramics.

The masters of the Samarkand school revive the traditions of decorating vessels with stucco elements in the form of heads of animals and birds.

The ceramics of Shakhrisabz is unusually warm and sunny. It is characterized by large decorative patterns, located in a free rhythm, creating picturesque spots.

In Tashkent ceramics there is so much mixed that it is difficult to single out a unifying factor. In the ceramic patterns of Tashkent products one can see pre-Islamic drawings and Arabic ligature, Hellenic motifs, Chinese symbols and even Russian patterns.

A wonderful hereditary master A. Rakhimov, the son of ceramist and researcher of ceramics of Uzbekistan M. Rakhimov, works in Tashkent. He creates dishes in the style of Temurid, Kashgar, black Samarkand ceramics. His works reflect the rich technological artistic experience of folk artists practically in all regions of the republic. The tradition of making a clay toy is also returning. This kind of craft, characteristic in the past for the Bukhara-Samarkand ceramics school, has practically disappeared.

Uzbek ceramics in the old days

Archaeological excavations testify to the great development of ceramic production in Uzbekistan. This production was also developed at the end of the 19th century.

Pottery items were produced in all cities and many villages.

Along with the ornamented and covered with polished exquisite dishes in everyday life, simple, rough non-pourable dishes were widely used. Jugs of various shapes and large earthenware pots for water, various dishes, and cups, basins for washing clothes, and other necessities were produced in all districts, towns, and villages, as the demand for them was very high. A special mention should be made of water pipes (tsuvur) and special pitchers (digir) for water-lifting facilities. The production of digirs was developed in Khorezm. A special branch of pottery was the production of tandirs (clay ovens) – special ovens for baking bread, which looked like a large pots without a bottom. They were molded manually from clay with a wool impurity and dried without roasting.

The rest of the dishes were molded on a pottery machine (charch). It consisted of two wooden circles, mounted on one axis, reinforced vertically. The master was sitting in front of the machine, rotating with his feet the lower circle. The upper circle with clay lying on it came into motion. The master very dexterously gave it the desired shape.

After the end of the molding, the vessel was cut from the machine, dried well, then the pattern and glaze were applied, and then it was burned in a special pottery furnace (khumdon).

Glazed dishes were made from good, specially worked clay, sometimes from a mixture of different varieties of it.

The special branch of Uzbek ceramic production was the production of burnt bricks. Front brick at that time almost was not produced. It was manufactured only in individual cases and in a small number.