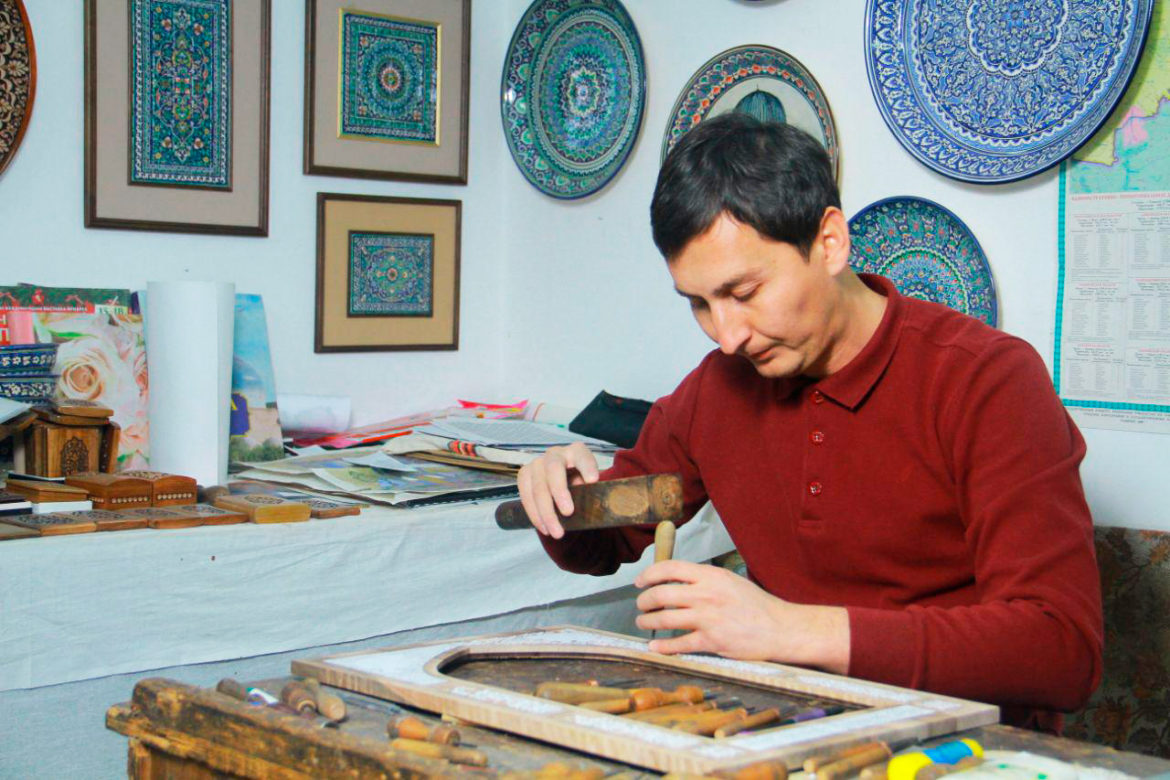 Uzbekistan wood carving is the art, which survived the centuries

Uzbekistan wood carving is the art, which survived the centuries

Traveling around Uzbekistan, it is hardly possible to see a traditional Uzbek house, where there were no wooden ornaments. Since ancient times, local masters loved and valued the tree and artfully shaped it with carvings.

Wood carving in Uzbekistan arose as decorations of wooden columns, which were greatly used in the ancient architecture. Later decorative carving was presented on various wooden objects, beginning from massive columns and beams for the ceiling, and ending with trunks, caskets, Koran stands, book cases, pencil cases, musical instruments and tiny children’s amulets. All of them generously convey the wealth of the traditional vegetative geometric ornament. Such trees as walnut, plane, juniper, elm and mulberry are often used by wood carvers.

The characteristic feature of the Uzbek school of wood-carving is that all products are made without the use of nails, but from a single block of pure wood. The identification and preservation of the beauty of the tree is one of the principles of the Uzbek folk masters. Thick carving patterns do not disturb the natural beauty of the tree, but reveal features of texture and color. There are numerous combinations of geometric and floral ornaments, with which masters decorate wooden products.

A delicate and complex branch of modern process of wood carving in Uzbekistan is the production of musical instruments. They are doira, rubab, gijak, nagora, surnay and others.

In ornamental flat-relief wood carving, Uzbek masters distinguish three main stylistic composition groups: bagdadi, islimi and pargori. Each group is characterized by its characteristic ornamental motifs and compositional constructions, as well as the methods of carving.

Styles of wood carving in Uzbekistan

The carving of the bagdadi style has the character of relatively simple geometric constructions. In the olden days, bagdadi varieties were used very widely to decorate household items. Further, characteristic samples of bagdadi style doors of the work of Samarkand and Bukhara craftsmen were shown.

At the core of islimi style are innumerable vegetative-geometric variations on the theme of the widely used classical islimi ornament, which has long been known throughout the Middle East.

This ornament has strict canons for the ornamental forms and compositions. It consists of curling stems, dotted with buds, leaves, flowers, which are weaved into quaint medallions. The islimi ornament is performed in one of the Uzbek technique of flat-relief wood carving with the selected background, often with a rich finish of relief and background.

Pargori carving is a special kind of fine background thread. It is based on a geometric grid of circles, squares and triangles.

The avowed centers of wood carving in Uzbekistan were and remain Khiva, Bukhara, Samarkand, Tashkent, Fergana. Each school is distinguished by its carving technique and patterns.

Wood carving in Karakalpakstan is associated with the decoration of the nomadic dwellings – yurts. The doors, interior items – lockers, food stands, dishes, musical instruments, horse harness, tools were adorned. Karakalpak carving wood has an ornamental character with a predominance of geometric, plant and zoomorphic motifs, often archaic. In the past Karakalpak masters widely used in their woodworking an overhead bone, finished with geometric engraving, and a kind of inlay with red cloth, efficaciously combining these techniques with flat-relief Uzbek carving. But wood was painted in dark brown and black tones. The decorative wood carving is not forgotten by modern masters of Karakalpakstan. Carvers continue to make musical instruments and various utensils. The modern art of wooden sculpture is also being actively developed in modern Karakalpakstan.

Despite all the trials and vicissitudes of fate, Uzbek woodcarving remains one of the most popular types of decorative art. Carved doors and columns become an integral part of the decor in the construction of public buildings, museums and religious buildings. The natural texture of the tree, the stability of ancient traditions, the warmth of skilled hands, transferred by the craftsman to his work, make wood carving of Uzbekistan especially attractive to humans in the modern world of high technologies.

Today, following the centuries-old art traditions, Uzbek masters of wood carving of the new generation make their invaluable contribution to the preservation of such a unique kind of folk art as woodcarving.